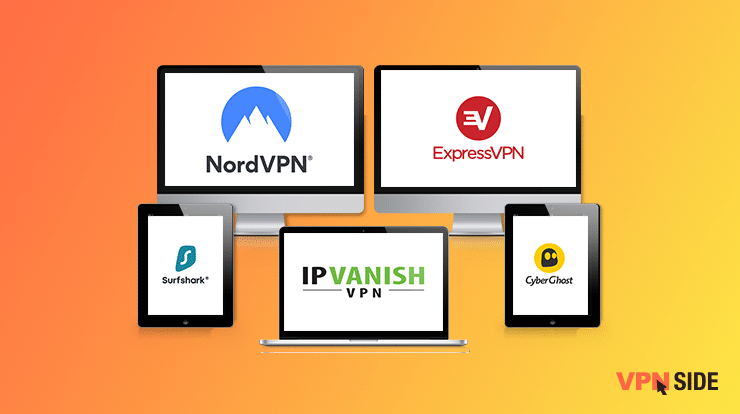 The VPN market is overwhelming. Every VPN thinks that it has the best VPN service for the price. Every VPN will tell you that the others don’t stand up against its encryption, server speeds, or server locations.

But you don’t have time to sift through all the dodgy, scammy services to find the best VPN’s. No one wants to spend hours and hours researching, scanning through websites, and working through free trials just to be disappointed with every prospect.

That’s why you’re here, isn’t it? You want us to help you sort out which popular VPN’s will give you the service you want for the right price. We have looked through the best of the VPN’s to come up with a list that we’re confident will all be strong contenders in your search for the best VPN’s.

We look at the most popular VPN’s to find which ones have great service at a decent price. To make it on our list, a VPN has to have

ExpressVPN is a very popular VPN that is most famous for its blazing fast speeds server speeds. Many users report that ExpressVPN beats out other VPN services, make it truly a VPN express (get it?). If you’re looking for top speeds, this is the one for you. VPN express indeed.

ExpressVPN offers an exceedingly broad list of servers, locations, and countries. They have 98 countries including multiple options in places other VPN’s don’t, especially in Africa, China, India, and the Middle East. Few VPN’s offer as many options in China or Africa, especially. If those locations are important to you, ExpressVPN stands out.

ExpressVPN supports an extensive list of streaming services, some of which I didn’t know before going to their website. It offers more and more ways to find the content you want that you can’t get without a VPN. Combine that with the huge list of server locations, and you can get around any geoblock access any country’s content.

It’s disappointing that ExpressVPN only offers 5 simultaneous connections. While it supports all the major OS’s, 5 connections just isn’t enough for a connected world. As every person’s device list grows, we’re going to run out of connections fast if this is the limit. That’s especially important if a VPN expects a long-term commitment.

At the time of this writing, there is no ExpressVPN free trial, but they do offer a 30-day, money-back guarantee, no questions asked. The yearly (+3 months) cost is $6.67 a month. That’s still higher than many of the VPN’s on the list. I would really like to see an ExpressVPN free trial, no credit card, but it’s not likely.

NordVPN may be the most popular VPN on the internet for a good reason. It’s reliable and secure, supporting multiple devices and fast, secure streaming.

NordVPN has the best encryption and security protocols, giving you a choice between the top two, OpenVPN ad IKEv2/IPsec. Most users won’t have to worry about that. They can be sure that this best VPN uses secure encryption as the default setting.

Every VPN balances speed and security. The more secure an encryption protocol, the more that protocol slows down the connection. If you’re not as concerned with security, NordVPN offers a Socks5 proxy for faster streaming and torrenting.

NordVPN supports a long list of streaming services, as many as any VPN on this list. It also supports all the major operating systems and browsers, except Safari.

The VPN offers 5,359 servers in 58 countries, located on every continent except Antarctica. Unfortunately, nearly all of them are in the United States and in Europe. There are especially few options in China, Africa, the Middle East, and India. If you need connection options in those areas, this might not be the best VPN for you.

NordVPN has a few options for subscriptions, ranging from $3.49 a month to $11.95 a month with a 30-day, money-back guarantee. The lowest plan is a great deal, but it takes a 3-year commitment. That’s a long time to commit to any internet service. I would love to see a NordVPN free trial that doesn’t take a credit card to show its commitment to privacy.

IPVanish is one of the most trusted VPN services. At the time of this writing, they have a TrustPilot score of 4.8 with over 4,500 reviews. Users love the intuitive app and that it covers all their VPN needs.

The list of servers and locations isn’t as extensive as some on this list, but it covers all the major regions of the world. It does lack support in the Middle East, only one location in Israel, in Africa, only two locations, and no locations in China. Unless you need to put your location in one of those regions, that shouldn’t be a problem.

As far as I can tell, IPVanish doesn’t have a list of the streaming services it supports, but their easy-to-navigate help page mentions Netflix and Hulu. They also have several articles about watching live sports. IPVanish definitely works with streaming, but it would be wise to test it out if you have a smaller streaming service you like.

I really like the number of simultaneous connections IPVanish offers. While 10 isn’t as good as an unlimited number, it should be enough for most people to connect all their devices at one time. You probably won’t outgrow IPVanish as your devices accumulate.

There is no IPVanish free trial, unfortunately. So, you can’t test out the service without putting your money down. Plus, the money-back guarantee only lasts for 7 days when most VPN’s offer a whole month’s guarantee. With such a short period, it would be really nice to have an IPVanish free trial. If you want to test out IPVanish, make sure you have time in your week of guaranteed time.

Surfshark is another of the best VPN services on the internet. If you want the TL;DR version: Surfshark offers a low price, extensives streaming options, and support for gaming consoles.

Surfshark’s device support makes this VPN stand above the rest. If offers support for all the major operating systems, PS 4 and Xbox, Chrome and Firefox, and Fire TV. Many people use their gaming consoles for streaming to their TV, and this is one of the few VPN’s that will support that.

To ensure that all these devices work at the same time, Surfshark gives you unlimited simultaneous connections. You can run your phone, tablet, gaming console, and whatever else you want at the same time.

Surfshark also pays particular attention to privacy. They offer the standard features common among VPN’s, like ad blockers, secure encryption, and no logs.

But, Surfshark also has two modes that give added privacy. First, camouflage mode disguises the VPN server, so even your ISP doesn’t know that you’re using a VPN. Second, they also offer a multi-hop service, so your VPN traffic can go through multiple servers and locations before going to the server you want.

To start, PrivateVPN’s website is really difficult to navigate. Keep this in mind when you do your research. We struggled to find all the details behind their server count, streaming support, and a variety of other options. It wasn’t until we started searching using terms like “private vpn streaming” until we started getting relevant pages.

That tells me a lot about PrivateVPN’s customer service and design. While it is still among the best VPN’s, it’s difficult to navigate to the right guide, and I worry about how responsive their customer support will be.

PrivateVPN’s streaming support suffers from their poor website and app design. I didn’t test every streaming service out there, but their site only mentions two, Netflix and BBC iPlayer. It’s likely that they support most streaming services, but there isn’t a way to ensure your favorite is supported until you try it.

Most of locations only include one listed server address, except for locations in the United States. If you want a lot of flexibility in server locations, either try a different VPN or test it out in with a 30-day, money-back guarantee period with a month-to-month subscription.

PrivateVPN’s cost is the reason why this VPN makes the list. It has a very low month-to-month subscription at $7.67. Some of the other VPN’s on this list go almost twice the price for a monthly subscription.

Their lowest-cost option is only a 1-year commitment for $3.82. It doesn’t cost much, and it’s one of the most short-term commitments of all the VPN’s on the list. There is also a PrivateVPN free trial. The VPN offers a 7-day, PrivateVPN free trial so you don’t have to put any money down to test the service.

This is huge, because of all the questions about the service compared to their site. A 7-day trial will let you figure out whether PrivateVPN will work for the kinds of traffic you use without relying on the confusing information their site offers.

One of the reasons you go to a site like this is to see which VPN’s experts trust. Sometimes, though, it’s nice to know what regular users think. CyberGhost in 2020 has an excellent rating on Trustpilot with a 4.8 out of 5. People love how this VPN works.

CyberGhost in 2020 has a long list of servers and locations, though most of them are in the standard spots. Their server list is quite small in India, Africa, and the Middle East. One exception: CyberGhost has a location in mainland China, something many VPN’s don’t. Just be careful with servers in China. It’s likely that the Chinese government can track your traffic through it.

CyberGhost in 2020 has a very, very long list of streaming sites it has tested and supports, 38 in all, longer than any other VPN we’ve reviewed. While the other VPN’s may work on that many, CyberGhost posts their list on their website. They support everything from the big players, like Netflix, to Mediasetespaña.

In the opinion of this CyberGhost review, guaranteed support and variety of streaming sites makes this the best service for streaming.

Most VPN’s will claim to have the best, or at least really fast, speeds. Hotspot Shield is actually tested and rated by Ookla Speed Test as the fastest VPN in the world. That’s right, if you need the most blazing-fast VPN on the planet, Hotspot Shield is the one for you.

Speed matters most when you need to download large files, stream HD content from far-away locations, and play games using a VPN. If primarily do these things through a VPN, Hotspot Shield might be the best way to be secure without sacrificing speed.

Hotspot Shield also uses only one security protocol, their own proprietary system, called Hydra. Hotspot says that they decided to develop Hyrda after they were frustrated with the current industry standard, OpenVPN, because they noticed latency issues. Hydra is secure, like OpenVPN, but it is faster, too.

This VPN service also offers transparent security reviews. They publish an annual transparency report to offer the world a look at their internal security and logging. They are committed to privacy and security, and they spend the money to show you how secure they are.

Hotspot Shield is the only VPN on this list to offer a free version of their service. You can use it without entering any payment information, though you do need to open an account. The free service comes with limits, only 500MB a day, ads, fewer locations, and no streaming. The free version was fast enough to use for streaming with only the data limits to hold me back.

2 out of 2 found this helpful